Solemnity of the Blessed Virgin Mary, Mother of God

"The shepherds went in haste to Bethlehem and found Mary and Joseph, and the infant lying in the manger. When they saw this, they made known the message that had been told them about this child." Lk 2:16-17

Every year the church begins the New Year by holding up Mary, the Mother of God, as a model for believers everywhere. Mary, as mother, is first of all present to Jesus, something that is more difficult than it seems. Being present to another does not mean we try to fix or help them, but serve them. Like a good waitperson in a restaurant who does not hover or keep asking how your food is, our mothers only want us to be comfortable in our own skin. Mary is like this for Jesus and us.

Christians do well to remember Mary's lessons. When we realize that our primary task is to witness to the truth and transforming power of the Christ, we never have to be the center of attention. Rather, we listen more than we speak, and we live faith as a verb: an action, and a lifestyle, that invites others to live for others. We do this more naturally and simply when we are grateful for the great gift our our faith and our salvation.

Today, serve someone with joy.

Do you have a special devotion to Mary? Why?
Posted by Br. Jack at 8:30 AM No comments:

"And the Word became flesh and made his dwelling among us." Jn 1:14

Those of us who have lived in the New York area most of our lives are very familiar with the New Year's Eve celebration that goes on each year in Times Square.  More than a million people begin gathering early in the afternoon and then wait for hours so they can watch the lighted ball drop exactly at midnight to celebrate a New Year.  Like any ritual, it is designed to help people begin again, to put aside the past and focus on the New Year just begun.  Many people use the occasion to seek reconciliation with family or friends. Even more make resolutions to change their lives so that 2017 will be better than 2016.

While we understand and appreciate the fun and hope of the night, the incredible statement we read in the first chapter of St. John's gospel can lift our spirits even more.  John writes,  "And the word became flesh and made his dwelling among us." These words remind us of something that is almost too powerful for us to fully appreciate. Despite the failure of the human community to honor God and neighbor consistently, despite our wandering from the path of justice and life, God loves us so much that God speaks the word that becomes flesh as the ultimate sign of God's undying love. God wants to be with us, to walk with us, to weep with us, and live with us forever.

Today, let go of fear and open your heart to the indwelling of God in your lives and communities.

Are New Year resolutions important to you?
Posted by Br. Jack at 8:30 AM No comments:

Family life at the time of Jesus was very different from how we understand family life in 21st century North America. Gender roles were sharply drawn, leaving women especially with few rights, and although women and mothers were honored, they rarely owned property or had any education, making Jesus' relationship with women, many of whom became important disciples in the earliest community of believers, all the more interesting and challenging.

The letter to the Colossians reminds us that the so called feminine virtues of compassion, kindness, humility, gentleness and patience are foundational to Jesus' vision. If we are going to be in what the scripture's call "right relationship" with one another, we must put on these virtues, especially in our families. Unless parents are humble in their guidance of their children, their offspring will inadvertently learn that power is something to be used over others rather than with them. Only when everyone in a family senses their own dignity, even when receiving correction, can we avoid creating an "us" against "them" mentality which can never be good for family life.

What do you think are the most important family values in the bible?

"The child's father and mother were amazed at what was said about him." Lk 2:33 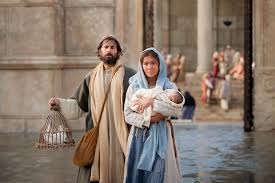 Thinking about bringing their new born son to the temple must have ben a delight for Mary and Joseph. We might imagine them being stopped by friends and strangers alike wanting to congratulate them and offer them a blessing and a prayer.  Surely, their hearts must have overflowed with joy when Simeon, full of the Holy Spirit, (Lk 2:27) took the infant Jesus into his arms and declared that he was gazing upon the "light for revelation to the Gentiles, and glory for your people Israel.” (Lk 2:32)

Though Mary and Joseph could not have understood completely what was happening to them or what their own role would be in God's plan to save the world, they knew that Simeon and Anna were filled with delight, and so were they. Glory for Israel and a light to the nations had been born to them.  And to us!

Today, be a light to those around you.

What about our faith brings you joy?
Posted by Br. Jack at 8:30 AM No comments:

"When Herod realized that he had been deceived by the magi, he became furious. He ordered the massacre of all the boys in Bethlehem and its vicinity two years old and under." Mt 2:16


Today seems like a perfect day to celebrate all the children who have been lost, stolen or killed for the sake of power, money or unearned prestige, beginning with the children slaughtered four years ago in Newtown, Ct. While we will never understand the twists a human psyche can take that result in the massacre of children, we know it happens, has happened before, and will happen again.

All life is a gift from God and must be spent as a gift for others. When we fail to remember this most fundamental faith demand, we too often wallow in our own failures and losses. That our well- intentioned deeds do not always result in success is not the point. That we freely offer others the gift of ourselves is. That is why Christ came among us. He was and is a sign that God cannot and will not abandon us, even when we turn away from God and fail to live the Gospel. We have only to lift our heads to find God waiting to lead us again along a path of other centered love.

Today, remember the innocents: children, the disabled, the mentally ill.

How does faith help you face unspeakable evil?
Posted by Br. Jack at 8:30 AM No comments:

“Observing the boldness of Peter and John and perceiving them to be uneducated, ordinary men, they [the questioners] were amazed, and they recognized them as the companions of Jesus.” (Acts 4:13)

Sometimes we discover God in the ordinary events of everyday life. James and John, in their boat with their father, were mending their nets when Jesus called them to follow him. When they responded positively their lives were changed forever. Together James and John would witness the transfiguration and be at the last supper. John would also accompany Jesus to the Cross where Jesus would ask him to care for his mother. Because he listened and acted, John witnessed and was transformed by some of the most important moments of Jesus' faith journey.

Nothing in the life of the apostles was more important than following Jesus faithfully. In the beginning of their ministry, they had little to do except prepare others to hear the word of God. Only after the resurrection would they take up in earnest the works of Jesus, and the same is true for us. As we enter into the great mystery of the Incarnation, we have only to listen, respond, enjoy, and celebrate. Soon enough we will have to announce what we have seen and heard, and seal our faith in service to others.

Children are probably our best teachers at this time of year. As Christmas day fades, children usually settle down with one or the other toy and play for hours. I am always fascinated by their focus and peace, and they teach all of us to live in the moment as fully as possible. The call to spend the joy of Christmas will come soon enough. For now, faith is simple and we should delight in it.

Today, take some extra quiet time in the presence of the One who is always near.

What brings you most joy at the Christmas season?
Posted by Br. Jack at 8:30 AM No comments:

"Stephen, filled with grace and power, was working great wonders and signs among the people...but they could not withstand the wisdom and the spirit with which he spoke." Acts 6:8,9

The reasons we reject others are many. Sometimes we don't like or trust the person. At other times, their message annoys or upsets us, and unfortunately, there are some who reject others because of race, ethnicity, culture or sexual orientation. Although most of us have been raised with the bromide, Don't judge a book by its cover, we all have our prejudices.

Stephen was rejected simply because he was preaching the salvation of Jesus Christ, a message that frightened traditional religious types who used their power to control others' lives. When Stephen's wisdom and spirit began to sway people towards Christ and away from the synagogue, his fate was sealed. Some scholars believe that Stephen had attended and worshiped at the synagogue in which he was preaching, making his sin even greater. To draw others away from the Talmud was bad enough but to do it to one's neighbors and friends was a much worse offense.

Putting Stephen's feast on the day after Christmas is no accident. The church wants believers to know there is a cost to following the babe of Bethlehem. The joy we feel at Christmas must be tempered by the challenge of every day faith, and though Stephen's witness leads to his death, he dies with gratitude and hope.

Today, be grateful for those who live and speak our faith with power no matter the cost.

Have you ever been attacked or rejected because of your religious faith?