Christ, King of the Universe

"I myself will look after and tend my sheep. As a shepherd tends his flock when he finds himself among his scattered sheep, so will I tend my sheep." Ez 34:11

The Prophet Ezekiel teaches us that God is our shepherd, the one who promises to be our protector especially at night when we are most vulnerable.  In becoming our shepherd God assumes the role of the lowly peasant, someone in the ancient world who had no voice, whose only task was to protect the sheep. Illiterate but compassionate, shepherds would gather all the sheep together at night and literally lie down at the opening of the sheep pen to keep predators from entering. God promises to be our shepherd, our guide, our protector.

This aspect of God's nature is made even clearer in today's gospel when Jesus, as the King of all creation, assures us that when we assume the role of shepherd and feed the hungry, give drink to the thirsty, shelter to the stranger, clothing to the naked, and show compassion to the sick and imprisoned, we do it for him.  Becoming totally other centered is the task of shepherds and Kings, and we can do this on a daily basis when we look out for those most in need and those often ignored or dismissed by others as pariahs.

Today, thank God for the privilege of visiting the sick and imprisoned, of feeding the hungry, clothing the naked and giving drink to the thirsty.

How do you understand the Christian call to be shepherds and servants to those in need?
Posted by Br. Jack at 8:30 AM No comments: 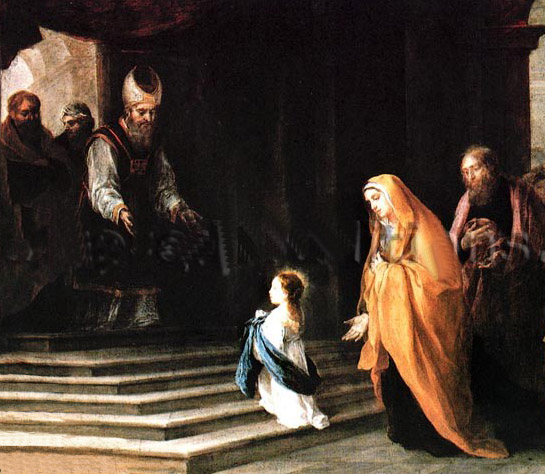 Although there is a powerful message in Mary's presentation, the art that emerged to help us understand this mystery is heart rending. How could a couple who had been childless let go of their daughter at such a young age? Would God ask this of them or anyone? When we see Anne's face in the depiction of the event we wonder what it must have been like for her see Mary walk into the temple. Did she worry, fret, wonder what might be next for her? While there are no answers to these questions, one truth emerges. God will always be near. No matter what we might have to suffer, God will be our companion. St Anne knew this. Mary knew this. We know this.

Today, pray for the courage to face whatever difficulties you encounter with faith.

How do you face unanswerable questions?
Posted by Br. Jack at 8:30 AM No comments:

Rededicating Ourselves to Christ

Last week I helped celebrate the Confirmation of 40 young Catholics. It was a festive day full of joy, and many of us were thinking of our own Confirmation. Although few Catholics I know celebrate the anniversary of their Confirmation, it is something we ought to consider. Confirmation challenges us to focus more intently and naturally on the promises made for us by our parents at Baptism.

Taking time to remember and reclaim the gift of being anointed as priests, prophets and rulers, all of whom were rubbed with oil to signal their call to live faith fully, we realize we are never alone on our faith journey. Anointed as priests we are also challenged to gather others and consecrate all in God's name for worship, and as prophets we accept the challenge to remind everyone of the great demand of Christ to live his law. But most of all, Confirmation reminds us that Baptism is about dying to self in order to live for Christ in the sure hope that we have already been saved and have only to live out baptism's call in order to know and live with God forever.

Today, like the Maccebees of old, let us rededicate ourselves to a life of discipleship.

Do you ever think of your Baptism or Confirmation?

Distress and upset comes to everyone, even Jesus. We can curse it, fight it, deny it or cry over it, like Jesus, but we cannot avoid it, and our faith tradition is clear. Until we learn to accept suffering as an ordinary part of every life, we will waste time trying to elude it. If Jesus, the God man, was not immune to suffering, neither are we.

At the same time, the Gospel does not ask us to seek suffering, but to accept it when it comes, often without warning or obvious meaning. In a poignant and demanding book, Where the Hell is God, Richard Leonard, an Australian Jesuit, explores suffering from the inside. Devastated and lost after a car accident that left his sister a quadriplegic, Leonard reminds his readers that God does not will our suffering, but will enter it with us if we allow it. Avoiding easy answers and cliches about God testing us, Leonard invites his readers to walk together in faith as they seek meaning in darkness.

Today, revisit an incident of suffering in your life and ask God for healing.

How do you make sense of random suffering?

Living the Gospel without Fear

"I tell you, to everyone who has, more will be given, but from the one who has not, even what he has will be taken away." Lk 19:27

As we near the end of another liturgical year, the church offers us scriptural texts that help us reflect on the the year that is fast slipping away.  How have we used the gifts we received?  Have we spent them on behalf of the kingdom?  Are we richer for having given them away?

Luke's story of the nobleman who gives his servants 10 gold coins and challenges them to multiply his wealth while he is away, reminds us of Matthew's story of the talents but it is very different. Ten gold coins is a very modest gift.  Unlike a talent which would have been worth about $25,000, ten gold coins would have been the equivalent of about $200, and it should not have caused the servants overwhelming fear nor been difficult to invest in such way as to provide the nobleman with a healthy profit when he returned.

In other words, Jesus is suggesting that the gospel is easy to grow if we give it away generously. While some might fear that if we "spend" the gospel completely we will have nothing, everything about Jesus' life and death suggests that the more we give away the little we have, the more we will have for ourselves and everyone else who needs or wants it.

Today, worry about living the Gospel today not about what you will need tomorrow.

What are your biggest fears in living the Gospel completely?
Posted by Br. Jack at 8:30 AM No comments:

"There she attended the most wretched and contemptible at her own table." (Office of Readings)

Married at fourteen, Elizabeth of Hungary had three children by the time she was twenty only to suffer her husband's death and die herself at twenty four.  If this sounds like a thousand other stories you have read about a girl from almost any inner city in the United States, it isn't. It is a synopsis of the life of St Elizabeth of Hungary, the patroness of the Secular Franciscan Order, who in less than a quarter of a century of living, fired the imaginations of her contemporaries with her love of the poor and her willingness to serve them with her own hands and food.  In fact, her witness was so powerful, she was canonized only four years after her death.

Elizabeth was born into and married royalty. She had access to money and power, but when her husband died on his way to fight the sixth crusade,  she decided to leave the palace and follow Conrad,  her Franciscan spiritual director, to Marburg where she continued her life of compassion for those most in need.  Conrad wrote that Elizabeth "built a hospice where she gathered together the weak and the feeble. There she attended the most wretched and contemptible at her own table."(1)

Heroines and heroes are always important.  They not only encourage us to stretch beyond what feels comfortable in our faith practices and to live simple lives, they also remind us that our lives as Christians are public lives and ought to be impact the lives and lifestyles of our communities and nations.

People of faith, especially the married and families, are the ground upon which the church builds communities of compassion for the poor and justice for all. After all, it was the faith and courage of our parents and grandparents, so many of whom were immigrants, who came to this country and built, hospitals, schools, orphanages, soup kitchens and shelters because they knew that faith demanded they respond to the struggles they saw all around them.  Though the structures might change, the demand of the gospel to feed the hungry and give drink to the thirsty will never change. St. Elizabeth of Hungary, who is the patroness of Catholic Charities, remains an icon who challenges our generation not only to pray for justice in our churches, but to live the gospel in our streets.

Today, recall someone who has been a heroine of hero to you and pray to live like them.

Do you have a favorite Saint?
Posted by Br. Jack at 8:30 AM No comments:

The Vulnerability of Not Seeing

A older friend, struggling with his hearing and beginning to feel very isolated, told me he would have preferred to lose the use of his eyes than his ears. Embarrassed to ask people to repeat themselves, he found himself not participating in conversations and shying away from communal gatherings. Though he has hearing aids, he still often feels alone in a group and ignored by people with whom he often had enjoyable conversations.

Whether one is struggling with blindness or deafness is not the point of today's Gospel. The isolation and loneliness that accompanies the loss of any our faculties is painful, unnerving and confusing, especially in a society that often looked at physical infirmities as punishment for sin, and it is this to which Jesus addresses himself. The Lord wants us to feel and be an integral part of his body, the church. Anything that inhibits or limits this participation is his concern, and should be ours.
Sometimes, although we see and hear perfectly well, we fail to respond to others who are struggling. Too busy, too self absorbed or too compulsed by the need to succeed, we are blind and deaf to the needy.

Today, listen to someone you normally avoid.

What have you been privileged to see or hear that opened your heart to the Gospel?
Posted by Br. Jack at 8:30 AM No comments: