Even in the midst of a Global Pandemic, Pope Francis keeps encouraging believers in the Good News to be joyful, to remember all that God has done within us, for us and around us. Unless we are joyful, he warns, the power the Gospel will not impact others or attract them to know the source of our joy, Jesus Christ, our Lord and Savior.

Today we celebrate Gaudete Sunday, a small break from the penance to which Advent calls us. Gaudete simply means rejoice because the Lord is near, the Christ promised by God long ago continues to walk, live, suffer and die with and for us. It is a gentle Sunday that reminds us to think of someone who brought joy to our lives and in their memory, to ask for the gift of joy, not for ourselves but for others

Today, decide to be joyful and offer those with whom you live and know you best to lift up their eyes and hearts to the heavens. Jesus Christ is near.

Who or what helps you to be joyful and Spirit filled?

Our Lady of Guadalupe

A careful, meditation on the image of Our Lady of Guadalupe is very revealing. Mary appears as a shy, pregnant, peasant woman with bare feet.  Her hands are folded in petition like ours would be in the presence of God and an angel holds her up as an icon of devotion. 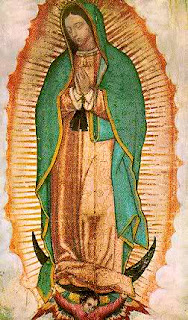 Every time I look at this image I think of the hundreds of young women I have met in the developing world. Often too timid to look in your eye, they speak softly and always with respect. More important, they answer questions directly and with few words. These women amaze me not only because many of them have good educations and have contributed to their communities with great generosity, but because they do everything without drawing attention to themselves.
Our Lady of Guadalupe is a woman from the developing world who identifies totally with those she has come to address and lift up, but she also challenges us not to take ourselves too seriously. She is a disciple of her own son and as such reminds us to follow him with humility and passion. Together, her image suggests, we are held up by angels, making our cause great and our voice important.
Today, walk humbly before the Lord and ask for guidance.
Has a quiet, unselfconscious woman ever touched your heart?
Posted by Br. Jack at 8:30 AM No comments:

“To what shall I compare the people of this generation? What are they like? They are like children who sit in the marketplace and call to one another, ‘We played the flute for you, but you did not dance. We sang a dirge, but you did not weep.’" Mt 11: 16-17

All of us enjoy something for nothing. Walking the streets of New York City, there are often salespeople offering new varieties of sports drinks or chocolate to passersby, and it is the rare person who doesn't take the "gift," even if they don't want it or need it. It's free, our unconscious says, take it! Because the distributors of these handouts hope that a percentage of the people who take them will enjoy the taste and become regular buyers of their products, they risk losing a good part of of their inventory in order to lay a foundation for big gains in the future.

Unfortunately, in this kind of environment, we can also get to a point where we think we deserve certain "perks," or fringe benefits even if we don't work for them. Like children who set the dinner table expecting to receive an extra portion of potatoes, we hope everyone recognizes our goodness and rewards us, but Jesus challenges this notion. The gift of faith is entirely free. We did not earn it. We cannot enhance it. We can only receive it with gratitude and give it away. More important, when we share God's gifts with others without expecting a return, the gift itself increases.

Today, put aside your expectations and let God treat you lavishly.

What expectations of God and others most get in the way of your living your faith more deeply?

"Among those born of women there has been none greater than John the Baptist; yet the least in the Kingdom of heaven is greater than he." Mt 11:11

Authentic humility, as demonstrated by John the Baptist, demands that Christians see themselves as part of something much greater than their accomplishments. As part of Christ's body we have a dignity beyond our imagination, but only when we accept the role designated for us and do not pretend to be someone we are not, or that we are in control of life.

This message, like so many others that Jesus offers us, is counter intuitive. While most people bow to humility as a value, few wear the clothes of humility, especially in the United States. Citizens of our nation are trained from an early age to excel, and to accept both the accolades and privileges associated with "winning."

While wealth and power are by products of a successful life in the United States, this is not the goal of those who profess to live a Gospel life. Gospel success is measured, not in what it produces, but in the seeds of hope that it plants. Never far from the realization that all life is a gift, and all worldly success is temporary, Christians believe that our "success" is an integrated and other centered life, and this is no easy task.

Today, don't say something you are thinking. Listen first to others.

Have you had an experience of humility that changed your life?

Come to the Lord

All of us have people in our lives who get under our skin.  Almost anything they say makes us defensive and resistive. Though we cannot easily articulate what it is that disturbs us about the other person, it is very real and disabling. Often enough the person who annoys us at every turn is a mirror image of ourselves. If we find ourselves talking too much and not listening carefully enough to others, we resent it when others prattle on and seem not to hear the opinions of others.

On the other hand, it is good to remember that our personality gets under the skin of others. Self reflection can be humbling, but it can also take the edge off our annoyance and calm our spirits. More important, it can be the first step in recognizing and accepting the call to conversion and transformation.

Jesus has a ready answer when we allow our own faults or the foibles of others to bother us unnecessarily. Come to me, he insists, don't be afraid. I will be your guide and protection; I will make your burdens much lighter but you must let me help.

Today, pray for someone who annoys you.

What is the heaviest burden the Gospel asks you to carry?
Posted by Br. Jack at 8:30 AM No comments:

Why do we blame others so easily when we are embarrassed or ashamed?  Uncomfortable and confused, we try to get out from under the microscope to bargain for time and examine why exactly we do this. Of course, there are any number of answers, all of which can teach us about ourselves, but at root we look for scapegoats in order to escape the consequences of our actions.
Countries and churches do this as well. Our own Catholic church was guilty of this fault when the sexual abuse scandal first surfaced. We blamed psychologists and psychiatrists who gave our leaders bad advice when they suggested abusing priests could safely return to ministry. We deflected attention from ourselves by reminding everyone that the worst sexual abuse offenders were family members, not priests, which is, of course, beside the point.

Honestly facing our failures and sins is made much easier when we have Mary, the Immaculate Conception, as our intercessor. This feast celebrates that Mary, without from sin from the first moment of her conception, is always free to pay undivided attention to us, her children. Free of self absorption, she reaches out for all those who look to deny their sin or turn away from their guilt, by inviting us to honesty and integrity, to admit our wrongs, and reach out in compassion for others.

Today, acknowledge one sin and ask for the grace to face its consequences.

How do you practice honesty and integrity in your life?

"No longer will your Teacher hide himself, but with your own eyes you shall see your Teacher, While from behind, a voice shall sound in your ears: 'This is the way; walk in it.'” Is 30 20-21

St Ambrose is one of those fascinating characters who populated the early church. Known for his keen political sense and theological caution, he tried to act as mediator in Milan when it was divided between its Arian proponents and the hierarchy of the Catholic church.

Arius proposed that Jesus, because he was created by God the Father, was less than the Father, and Catholics argued that Father, Son and Spirit although distinct persons, were one God, coequal and coeternal. The battle became fierce and when Ambrose tried to help the two sides reconcile, the people, not wanting bloodshed, called for him to be bishop.

Ambrose reacted strongly. Not yet baptized, he wanted no part of the church hierarchy. Only after the Emperor Gratian encouraged him to accept the call to leadership did he seek baptism and ordination, becoming one of the most important figures in the early church. Learned in philosophy and rhetoric, Ambrose impressed St Augustine with his oratory and insight. More important, he was unafraid to confront those, even emperors, who ignored the Gospel while claiming to be Christian.

Today, be a reconciler.

Who do you most admire for their wisdom and savvy?
Posted by Br. Jack at 8:30 AM No comments: