"Their widows were being neglected in the daily distribution." Acts 6:2

Early on, as the nascent church began to grow, it became apparent that unless widows and orphans were treated justly and with compassion, the preaching of the apostles and disciples would lose its power to change those who heard it. No word, no matter how divine, can move people's hearts if it does challenge people to care more deeply for one another and especially the vulnerable young and elderly.

In recent years, it has become common to hear people say someone either does or doesn't "get it," and we ought to be grateful that the early church "got it." As soon as it was reported that some widows were being ignored or not properly cared for, the apostles directed the community to select seven men whose primary responsibility would be caring for widows and orphans. The church understood that the message of Jesus was built on a commitment to the poor and voiceless.

Pope Francis reinforced this teaching not simply by going to a youth prison to celebrate Holy Thursday, he will soon a visit a center for undocumented refugees in Rome. Clear about his concern for the poor by his choice of the name Francis, after St Francis of Assisi, the Poverello or little poor one, Pope Francis is intent on challenging us regularly to live the Gospel, not just preach it.

Today, reexamine your attitudes towards refugees and undocumented people in our country.

What role do you think the church should have in social justice?

"If this endeavor or this activity is of human origin, it will destroy itself. But if it comes from God, you will not be able to destroy them; you may even find yourselves fighting against God.” Acts 5: 38-39

Gamaliel, a Pharisee and a member of the Sanhedrin, warned his compatriots not to disparage the disciples of Jesus unless they were willing to risk their own commitment to the Torah. Gamaliel had a wisdom from which we could all profit. Like Jesus, he insisted that we know others by their fruits, not by their level of insight or the sophistication of their education.

The lesson continues, especially for those ministering in the developing world. Too often those of us from the so called developed world make impossible demands on people wanting to preach the gospel as ministers. Forcing folks from Senegal, for instance, to study western philosophy for two years before entering theological studies in preparation for priestly ordination, seems an exercise in overkill and might prevent future priests (to say nothing of lay ministers!) from studying the philosophies implicit in their own cultures.

Gamaliel and Jesus are clear. Judge people by the quality of their faith life. Do not risk laying heavy burdens upon them without doing a thing to help.

Today, listen to someone whose life you admire for its integrity.

What fruits of Gospel living most move you to transformation?

"The Lord is close to the broken hearted." Ps 34

Having the courage to speak out in the face of injustice is rare. To speak directly against a king or president seems inconceivable to most of us, but that is exactly what St. Stanislaus did at the beginning on the second millenium. Unable not to confront his king for egregious offenses against the poor and God, Stanislaus was martyred for demanding that the king repent and change his life.

Stanislaus is a good Easter saint. Challenged by the resurrection not to be afraid, to stand up, stand out and speak up, the apostles rose to the occasion and became a living Gospel. So did Stanislaus. Empowered by the word, and unafraid to speak with the authority of the Gospel, Stanislaus became the apostle of Poland, a figure revered as much by the Polish people as Thomas Becket is by the English.

Heroes can sometimes thrill us, but unless we are moved to change by their witness to the faith, their memories are a distraction to our own conversion. Stanislaus continues to be a mentor for the Polish people, not just because of his confrontation with his king, but because he acted, not to advance his own power but God's.

What keeps you from speaking out for the poor more consistently?


"During the night, the angel of the Lord opened the doors of the prison, and led them out." Acts 5:19 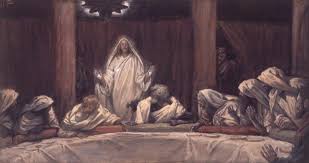 Doors are very important symbols in the New Testament, especially locked doors. Jesus appears to his apostles after his resurrection even though they are hiding "behind closed doors," and the apostles are freed by an angel after they had been put in jail by the high priest. Clearly, locked doors mean nothing to the risen Lord, and they ought to remind us that nothing can keep God away from us for long.

All of us have areas of our inner life that we ignore, deny or hide, but none of these strategies help us know and serve God more deeply. Unless we learn to open our hearts to God and for some at least, to seek spiritual direction, we will find ourselves lost more often than not. Trying to keep God at a distance might work for a while, but a spiritual director can help us recognize and attend to those areas of our life that embarrass or shame us, and even more important, a good spiritual director can help us take the risk to enter more deeply into the mystery of God's presence within and among us.

Today, let God do what God wants to do with your life.

What doors are you most likely to close to God and others?

Living Together in Faith

"The community of believers was of one heart and mind, and no one claimed that any of his possessions was his own, but they had everything in common." Acts 4:32

The ideal suggested in today's reading from Acts stretches our imagination. To be of one heart and one mind is almost impossible for most of us, even in small matters. That the early Christian community was expecting Jesus to return to take them to the place he had prepared for them was surely an incentive to live simply and to work for unity in their mission, but the passage still challenges us.

In many ways, being of one mind is not even a Christian value. Because the Catholic church so values culture and cultural difference, we expect and celebrate the way people from around the world express and articulate our faith. This is not to say that we differ substantially about our most basic values, but cultures that are communal will naturally emphasize family and community more easily and deeply than cultures like the United States that so values individuality.

Being of one heart, however, is something we must strive for every day, especially across cultures. To be one in heart means we recognize that the love of God unites us in Jesus and calls us to listen together to the voice of the Holy Spirit in order to proclaim God's undivided love for all people.

Today, ask God to free you from any unhealed disunity in your family or parish.

What helps you to be one in heart with other believers?

The annunciation has been painted and and sculpted almost as often as the Pieta and with good reason. The annunciation thrills us. Mary's shyness, questions and reluctance to welcome the angel help us believe in her and in ourselves, especially when we are anxious, fearful and resistive.


Andrea Del Sarto (1526) paints Gabriel as a pleading angel, not someone especially sure of his role, but determined to complete his mission, and one wonders if the artist was aware of the reformation exploding in Germany. Mary looks almost offended, and anxious. What might the angel be asking, and what might our role be?

What has been the most difficult request God has made of you?
Posted by Br. Jack at 7:30 AM No comments: